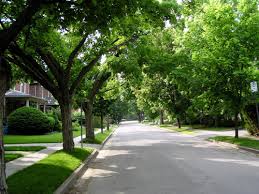 In a new paper published Thursday, a team of researchers present a compelling case for why urban neighborhoods filled with trees are better for your physical health. The research appeared in the open access journal Scientific Reports.

“Controlling for income, age and education, we found a significant independent effect of trees on the street on health,” said Marc Berman, a co-author of the study and also a psychologist at the University of Chicago. “It seemed like the effect was strongest for the public [trees]. Not to say the other trees don’t have an impact, but we found stronger effects for the trees on the street.”

Indeed, given the large size of the study, the researchers were able to compare the beneficial effect of trees in a neighborhood to other well-known demographic factors that are related to improved health, such as age and wealth. Thus, they found that “having 10 more trees in a city block, on average, improves health perception in ways comparable to an increase in annual personal income of $10,000 and moving to a neighborhood with $10,000 higher median income or being 7 years younger.”

“I’d feel pretty confident to say to a municipality, increase the number of trees by 10″ per block, said Berman.

Read Scientists have discovered that living near trees is good for your health by Chris Mooney in the Washington Post.